The Tio1608-D is a Dante-equipped I/O rack with 16 microphone/ line inputs and 8 line outputs. Tio racks feature the same recallable D-PRE&trade, microphone preamplifiers as the TF series delivering extraordinarily natural and musical sound. In combination with TF series consoles, Tio racks can be connected using up to three units with a fast and easy setup. * Optional NY64-D Card is required.

Dante Network Audio Protocol has been adopted, not only in TF, but also in other Yamaha digital mixing consoles such as CL/QL. Combining these I/O racks and the various consoles can significantly increase the flexibility of system designs. Patching can be enabled via &ldquo,Dante Controller while Remote HA can be controlled by &ldquo,R Remote software.
In the future, audio patching and Remote HA will be controlled not only from TF but also from CL/QL thanks to scheduled firmware updates. Please note that Remote HA of the Tio1608-D can be implemented only via the Primary port. (It is not possible via Secondary port).

Digital Stagebox System with a Maximum of 3 units 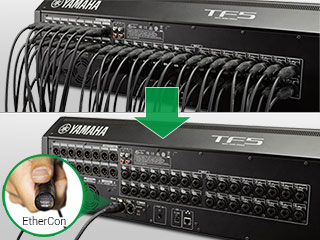 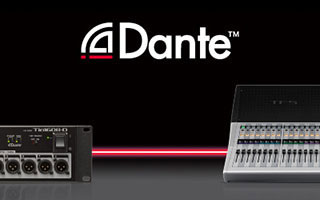 Dante has been adopted by the leading manufacturers and professionals in the sound reinforcement industry for its low jitter, low latency, and high sampling accuracy. Using the Tio1608-D you can easily configure a high-performance Dante stagebox system with little or no IT networking knowledge. Thanks to the flexibility of the Dante network protocol, TF Series consoles can be connected to an extensive range of Dante-enabled equipment such as R Series I/O racks. 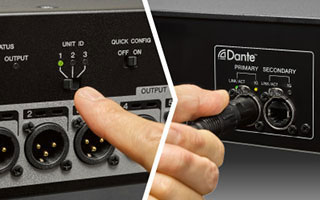 By enabling the QUICK CONFIG mode on the Tio1608-D, all the connection settings such as network settings and audio patching are set automatically making system configuration easy. After confirming QUICK CONFIG mode is activated on the TF console and Tio racks, simply set a UNIT ID for each Tio1608-D, then daisy chain the TF console and the Tio racks. Turn on the power and you're ready to go! 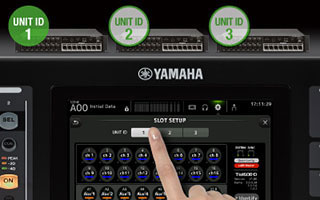 Once the basic configuration is completed you can easily assign inputs to best suit your system setup. By using the ALL INPUT function, users can assign all inputs to the Tio racks, the TF console or a PC/Mac device instantly. Users can also change each input to receive signal from multiple locations so that users can effectively use all inputs. 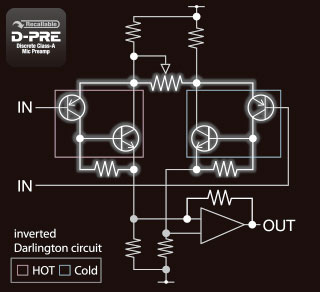 The Tio1608-D inherits the natural, musical sensibility that we pursued in the development of the TF Series. Mechanical construction, circuit board layout, power supply, grounding, and parts selection have all been executed with meticulous attention to detail and quality, combined with exhaustive performance and listening tests at each stage of development. The Tio1608-D features the same recallable D-PRE microphone preamplifiers as the TF Series to provide a consistent, natural, musical sound throughout the entire system.

In these specifications, 0dBu = 0.775Vrms.
+48V DC (phantom power) can be supplied to INPUT XLR type connectors via each individual software controlled switch.
*1. Sensitivity is the lowest level that will produce an output of +4dBu (1.23V) or the nominal output level when the unit is set to maximum gain.
*2. 1: GND, 2: HOT, 3: COLD
*3. Tip: HOT, Ring: COLD, Sleeve: GND